BACKLASH AGAINST BAN ON TEETHING NECKLACES

Ordinarily I would support the National Consumer Agency and their plight to protect the Irish consumer.

But there's one case recently that has me screaming NANNY STATE as I shake my head intending to defy the new ruling.
This is the effective ban on amber teething necklaces aimed at babies.

From a parents' point of view, we will adopt anything that reduces our children's pain and calms them down. Parenting is a tough job, so any small help when they're sick is very welcome.
Because they do get sick when they're teething. It reduces their immune systems, it blocks up their noses and makes them cough, it gives them ear infections and fevers, and it makes them very cranky.
Amber is a natural anti-inflammatory which reduces the swelling and pain around the ear, nose and throat area when teeth break through the gums into the mouth.
I've used it for all 3 of my kids - with impressive results. It does work - they have less problems cutting teeth and it reduces the sleepless nights and the amount of Calpol/Nurofen you have to administer to relieve their pain. My youngest, who is 23 months, is still wearing his now. He never seems to get teething pains (something I put down to the necklace).
That's not just my opinion, thousands of other mums swear by them.
I'm not worried about the ruling and I'm not taking my son's off. If I take it off the cheeks go red, the drool starts and he's crankier than usual.
children under 36 months. But who would put a teething necklace on a 3 year old? It is effectively putting a whole segment of the market out of business.
One online retailer Teething SOS weighed up its business options and decided safety was paramount over staying in business, so quickly issued a recall. Its entire business model is based on selling amber as a teething aid to babies so will this drastic move put it out of business?
EarthMother.ie was a bit more savvy, simply putting a disclaimer on the product: "According to EU Toy safety regulations EN-71-1 necklaces are not suitable to use as toys for children under 36 months. Our necklaces are not toys, please do not allow your children to play with or chew on them. Our children's jewellery must be worn under adult supervision. Under a European wide investigation into amber teething products some jurisdictions have changed the labeling requirements to "use over 36 months only". This is because of it's composition of small parts and is not because of any question over the amber itself."
Since talking to mums about this issue, my feeling is that these necklaces totally polarise parents to the point that they either love them or hate them.

There'll always be Fearful mums who never let little Jonny out of their sight and would never put something so crazy like a necklace on him. The opposite are the Alternative mums who never even give their kids Calpol when they're sick. I'm somewhere in the middle - but I will be joining in the backlash against the NCA and the European directive and staying true to what's already worked for us. Lorcan still wears his teething necklace today and I've zero fears about it as a choking hazard. 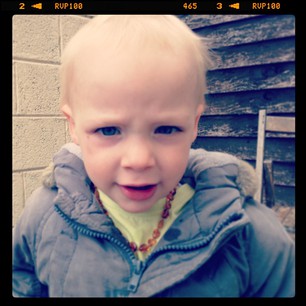 is scaremongering distressed mums by this new ruling, demonising something they've already been using problem-free for years. Thankfully, not every one is listening - they're using common sense and staying with their instincts.
Grannies already like to tut tut when they see my 23 month old boy wearing his necklace - what will they say now?
Posted by Tree at 3:41 AM No comments: